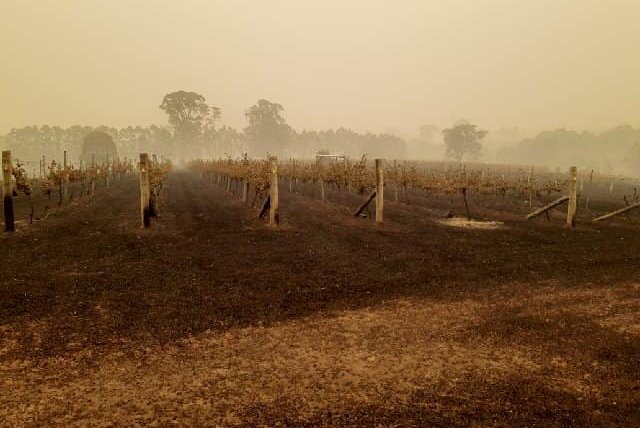 As the smoke clears from the disastrous bushfire season across eastern Australia, the wine industry is counting up the cost.

The industry’s peak body, Australian Grape and Wine Incorporated (AWGI), puts the bill at $40 million but the NSW Wine Industry Association thinks it is closer to $100m in that state alone when the downturn in wine tourism is taken into account.

That would not be surprising given the cost of smoke taint in 2003 was estimated by Wine Australia at $300m.

About 1,500 hectares of vines were burnt this summer, which is just 1 per cent of the nation’s vineyards, but a much bigger area has been affected by smoke taint.

That has caused some wineries to write off their whole vintage, while thousands of others have been testing their grapes to decide if they are worth picking.

Wine tourism has been hit hard and businesses are wondering how long it will take before the tourists return.

In the central west of New South Wales, vineyards and cellar doors were cut off by road closures with one business in Mudgee describing the season as the “quietest in a decade”.

Nicole Samodol, from the Orange Region Vignerons’ Association, said the roads were closed and tourists could not get through from Sydney.

“We were cut off because of the fires in the Blue Mountains,” she said.

Executive officer of the NSW Wine Industry Association Angus Barnes said NSW produced about 30 per cent of the nation’s crush and he expected premium wine volumes would be down.

“I think there will be a shortage of good quality NSW wines in 12–18 months when the 2020 wines are released into the market,” he said.

“That gap will be taken up by wines from other states and possibly also imported,” he said.

“The impact is very significant in certain areas [and] there will definitely be less [wine] available,” he said.

Mr Potts was weighing up whether to replant his vineyard, having also lost some equipment and his irrigation system in the fire.

Testing times in the Adelaide Hills

The Cudlee Creek fire in the Adelaide Hills affected about 30 per cent of the grapes grown in that wine region.

“It certainly isn’t looking good for some growers who were in or close to the fireground,” she said, but she did not think it would affect the quality of Australian wine.

“People don’t risk it at all with grapes and they’re not going to put their name on something that isn’t good.”

“There will be less of them, they will be hard to get, but what is made will be very good.”

Winemakers were doing ‘mini’ ferments and getting the wine tasted to ensure the wine was not smoke tainted.

“All these winemakers sit around, there’s about 15 of them, and smell, taste, look at the colours and try to figure out if people’s wine is tainted or not,” Ms Treuel said.

The impact is much more severe in the Hunter Valley in NSW where as much as 90 per cent of the 2020 harvest will be scrapped.

Brokenwood Wines, Meerea Park Wines, and Davis Wine Group have also reassessed harvesting their grapes, with some being left unpicked.

The Tyrrell family have operated in the Hunter Valley since 1858.

Bruce Tyrell said they normally harvested 1,200 tonnes of grapes but they had lost 80 per cent of their crop.

“We fed a little bit to cattle … and the rest we’ll drop on the ground and it will be worked back in as mulch and fertiliser,” he said.

Mr Tyrell was also concerned about the economic impact on the district and the workforce of about 1,000 people who normally picked the grapes.

“It’s mostly backpackers and they’ve moved on to other areas, but the loss for this region is what those young people don’t spend here,” he said.

Recovery will take years around Tumbarumba

Some vineyards in Tumbarumba at the base of the Snowy Mountains lost 90 per cent of their crop in the fires in early January.

Richard Cottom is a vigneron at Tumbarumba and is the fifth generation of his family in the region.

He saved his cool climate vineyard but he may have to write off this year’s crop due to smoke taint, and it’s not the first time he has lost a vintage.

His vineyard was hit by hail in 2011, so this is another terrible blow.

Mr Cottom was running out of wine to sell and it will take two to three years to produce more wine due to the long maturation process.

“This was going to be the big vintage,” he said.

“If we picked in March we wouldn’t bottle that till February next year or releasing that wine until the middle of 2021.

“That’s a long time and that’s partly why I’m thinking of going fishing for two years.”

Labs working around the clock

Wine laboratories around the country have been kept busy testing grapes for smoke taint.

In a normal year tests would come back in three to five days, but with so many fires around Australia there have been some delays.

Kerry Treuel said it was taking up to eight days.

“Which is difficult for growers and winemakers who need these tests back before they can make a decision about whether they should spend the money, the resources, and time picking that crop,” she said.

Greg Howell is managing director of Vintessential Laboratories, which has tested thousands of grape samples for smoke taint at four locations around Australia.

He said the distance and the freshness of the smoke had an impact.

“Some vineyards can have smoke on them and not have any smoke taint, while others that are closer and have a longer exposure to the smoke, and the smoke is fresher, can be tainted,” he said.

Testing costs around $300 and the NSW Government is offering funding to cover a number of tests per business up to $1,200.

Results from the extensive testing being done by the Australian Wine Research Institute (AWRI) in Adelaide were not available, so it was not possible to paint a clear picture of the impact.

Ms Treuel said the information provided by the AWRI was private and only given to the winemakers.

This article was written by the ABC.